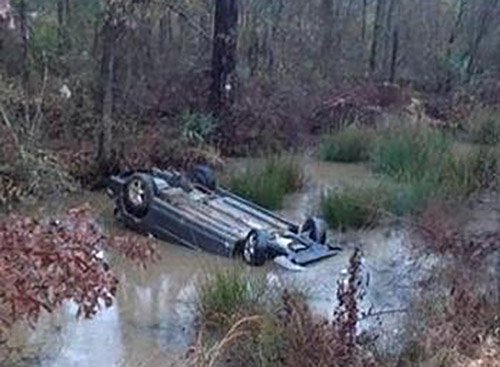 December 31, 2014 Mississippi heroes bring drowning girl, 4, back to life after she lay unconscious in submerged car for 10 minutes

Little Helena White had to be cut free and revived with mouth-to-mouth by Brandon resident Sherry Jackson after the Sunday afternoon incident.

Hero neighbors saved a drowning 4-year-old girl by hauling her out of a submerged car and bringing her back to life on the side of the road.

Helena White’s mom was driving the duo near Brandon, Miss., at 4 p.m. Sunday when she lost control of the car and flipped it into a ditch, reports The Clarion-Ledger.

The vehicle soon became flooded in 15-feet of water.

Sherry Jackson, who lives opposite the crash site, heard screams and sprinted over. She jumped into the waist-high water and found an unconscious Helena trapped in the back seat.

Jackson, joined by five other locals, desperately tried to cut the little girl free – but the straps were too tough.

Time ticked by as the group frantically rolled the car high enough out of the water. Then, some 10 minutes after the crash, they were able to cut her out.

“The little girl was blue,” Jackson told The Clarion-Ledger. “We weren’t sure if she was going to make it.”

They took Helena up to the bank, where Jackson performed mouth-to-mouth. And, after about five minutes, the little girl began to breathe on her own.

The 4-year-old was rushed to University of Mississippi Medical Center, where she’s reportedly in a critical condition. Jackson said it was “instinct” to jump into the water.

“You don’t think, you just do. God definitely put all of the right people there at the right time,” she told The Clarion-Ledger.

“If it was my child, I know someone would have done the same thing for me,” she added.

Rankin County Sheriff Bryan Bailey said the accident occurred after the girl asked her mom to look at a picture she’d drawn.

“By the time she turned back around to the front, she had lost control of the vehicle, over corrected and flipped,” he said.

They have since been named as Harmon Jackson, Tristen Jackson, Jessica Dickson, Deputy Wade Spencer and an unknown man.