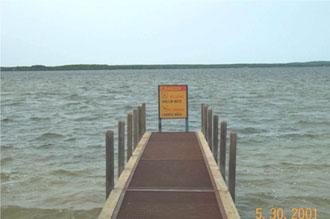 On August 22, 1996, Mary Ann King and Lauren Walker took their three children to Lake Cheshire to have a picnic and to go swimming. The children were instructed to stay within the “swimming area” in water roughly to their waist and not to go out into deep water. While the children were in the water, Mrs. King and Mrs. Walker sat at a picnic table where they talked and read the newspaper.

When Mrs. King looked out at the children, she observed that the three girls were in deeper water near the boat launch area buoys and they appeared to be in trouble. Mrs. King then entered the water and assisted her own daughter to shallow water. When she looked back, she could no longer see Lauren Walker or her two daughters.

When interviewed by the State Police, Mrs. King indicated that neither of the two adults or three children were competent swimmers and that no one was wearing life jackets.

The bodies of Lauren Walker and her two daughters were recovered by divers from the local County Dive Recovery Team. The bodies were found in approximately 6 feet of water, approximately 120 feet from the shore, almost directly in front of the dock at the boat ramp. The condition of the water was choppy with very poor underwater visibility. The lake bottom is sand and gravel. The water temperature was approximately 68 degrees F.

The County Ambulance transported the patients to the local hospital. The three drowning victims were pronounced dead upon arrival at the hospital.